As I mentioned in yesterday’s UCM, we could be witnessing a change in how Russian conducts operations, urban warfare in particular. Today in the morning there was a cruise missile strike on a city center in Kharkiv. According to a 2001 census, 25% of citizens living in Kharkiv were Russian. In early 2014 it was in Kharkiv where Russia was orchestrating marches calling for the restoration of Yanukovych back to power. It was also to Kharkiv where Yanukovych first fled before going to Russia. As such, to strike this city twice within two days is a significant departure from the previous behaviour.

We are seeing more and more examples of Russian servicemen abandoning equipment even though it is not damaged and has not run out of fuel. This is an indication of low morale, confusion as to the goals of the operations, probably a lack of contact with command structures. In this way Russian forces have already lost some T-72B3s, a Pantsir-S1 (it actually got stuck in the mud so confirms no repair and evacuation capability), or a Tor-M2 air defence system. Morale has to be very low.

Lukashenko and the map

President Lukashenko of Belarus held a Security Council meeting today to discuss regional security issues. In his typical fashion, he confirmed that Belarus was ready to talk to anyone and anytime for the sake of peace in the region. But also stated that the operation against Ukraine was defensive in nature due to a threat from Kyiv. 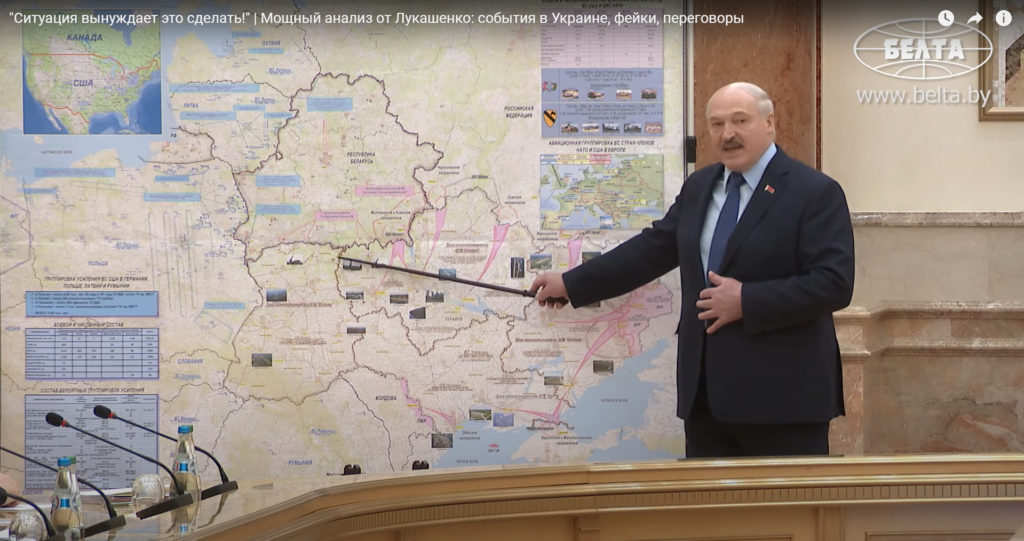 During his speech, Lukashenko had an exchange with the Minister of Defence, Viktor Chernin, who confirmed that elements of two Belarusian SOF brigades, the 103rd Guards Airborne Brigade and the 38th  Guards Air Assault Brigade are deployed along the Brest-Pinsk axis. The main task of these units is to cover, to defend the southwestern part of the Belarus-Ukraine border.

As for Ukraine, the map is showing a lot of things that have happened, but also things that haven’t taken place (yet?). Elements of the EMD forces and the 41st Combined Arms Army were tasked with encircling Kyiv.  Another thrust from Belarus is aimed at Zhytomyr. The latter hasn’t happened.

Forces opposite Sumy were to push to Cherkasy-Kremenchuk.

Forces opposite Kharkiv are to link up with units pushing from the ATO zone and cut off some elements of the Ukrainian forces deployed there. This also hasn’t happened.

Forces from Donbas are to push towards Dnipro. This also hasn’t happened.

The most puzzling is Odessa, which was to see/is to see an amphibious assault. This hasn’t occurred and I personally don’t think it will. Not at the current stage at least.

As far as the south is concerned, this would effectively create a land bridge from Moldova to Russia proper.

I’d caution against taking this map seriously. This could be a deception, maskirovka, reflective control. Also an attempt to put pressure on Zelensky and force him into negotiations and force him to take a less demanding position.

As we can see, the map shows Ukraine with boundaries inside as if it was partitioned. I don’t think that’s the case. The lines correspond with Ukrainian Operational Commands of which there are four: West, North, East, and South.

There is a great article published on WaPo about logistics in support of large-scale military operations. The author states that problems with supply are the norm, not the exception. A few examples are provided, especially with regards to US operations in Iraq.

However, whereas US had issues with supplying division-level formations in 2003, Russia is struggling with companies and battalions. I expected many things before the attack happened, but surely I didn’t expect such logistical hurdles. I cannot see how this can be now corrected, because a lot of things do not seem to be working.

I am very critical of the Russian performance so far and I assess it to be worse than in Georgia in 2008. Surely, Russia can still attain its political objectives, or some of them, but it will only be thanks to the preponderance of power, equipment, and manpower and not because of proficiency in operational art. I read Krasnaya Zvezda a lot and every single report from an exercise mentioned the need for military commanders to be tactically flexible, think outside the box, and display the cunningness of the battlefield. I don’t think this is what we are seeing now. 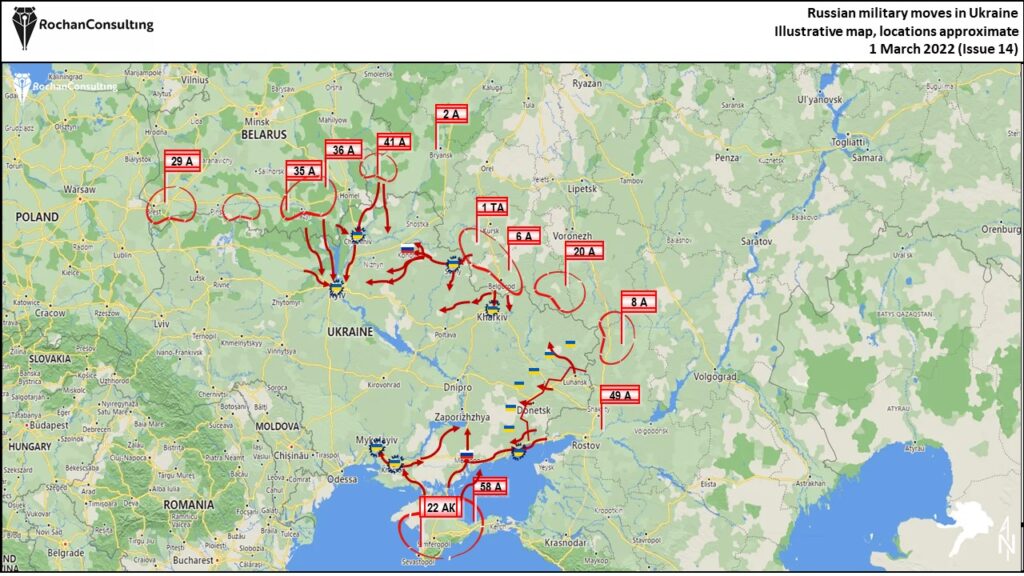 The military convoy stretching 27 kms reached the Antonov Airport. The base could now serve as a forward-deployed base.

Russian units were spotted at Bobrovytsya. There were also reports of checkpoints in Brovary being destroyed. Russian forces continue to march towards Kyiv and are getting closer to the city by the day.

Russian forces pushing from the east aren’t substantial by any measure. Probably several BTGs but divided into companies and spread across the wider area.

Ukrainians are conducting a mobilisation call-up in Zaporozhye. However, it doesn’t appear that Russian forces are moving north from Vasylivka.

Airbus imagery acquired on 27 February 2022 showed Russian ground forces in a convoy of more than 230 vehicles, comprised of tanks, IFVs/APCs, trucks and other support equipment. They were traversing north along the M17 in the direction of Kherson. Several sections of the M17 were damaged suggesting that Russian ground forces likely came under attack by unidentified Ukrainian elements. Damage to the Konka river bridge was also identified and obstructions pushed ground forces into the adjacent lane to cross. Approximately 1.5km north of the bridge, a likely Russian vehicle was identified in the road smoldering with the convoy halting. At least 150 vehicles were separated from the rest of the convoy by at least 3.5 km, where another 82 vehicles were identified on the other side of the Dnieper river. 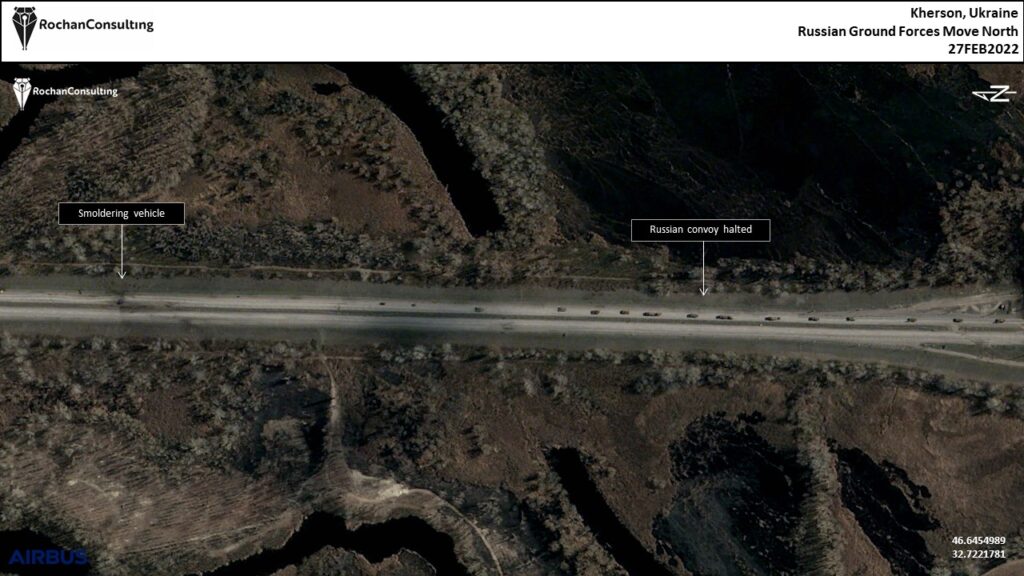 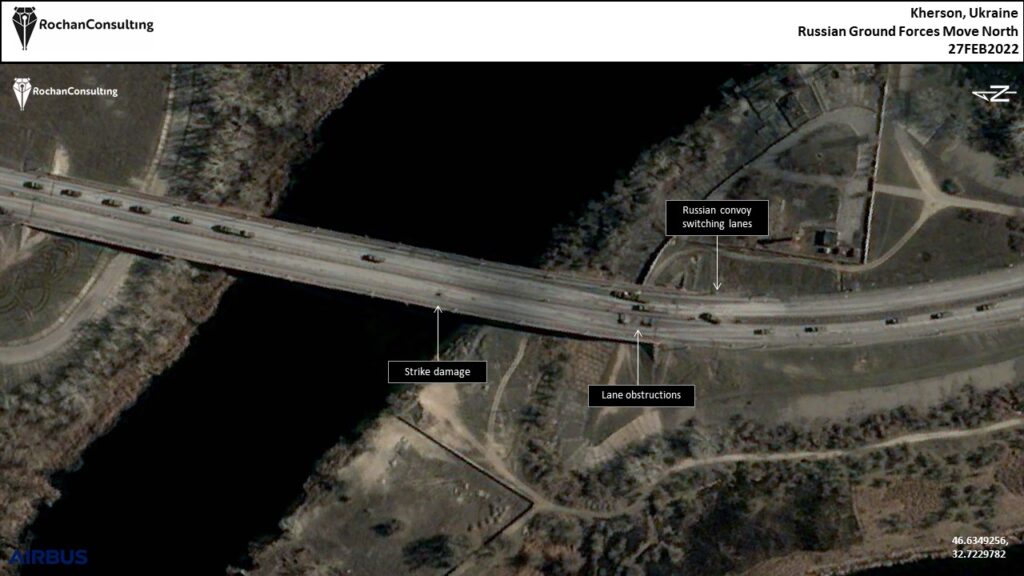 I have seen these reports floating over the internet here and there. So please take note of the following:

No portion of this report may be reproduced, reused, or otherwise distributed in any form without prior written consent, with the exception of any internal client distribution as may be permitted in the license agreement between client and Rochan Consulting. Content reproduced or redistributed with Rochan Consulting permission must display Rochan Consulting legal notices and attributions of authorship. The information contained herein is from sources considered reliable but its accuracy and completeness are not warranted, nor are the opinions and analyses which are based upon it, and to the extent permitted by law, Rochan Consulting shall not be liable for any errors or omissions or any loss, damage or expense incurred by reliance on information or any statement contained herein 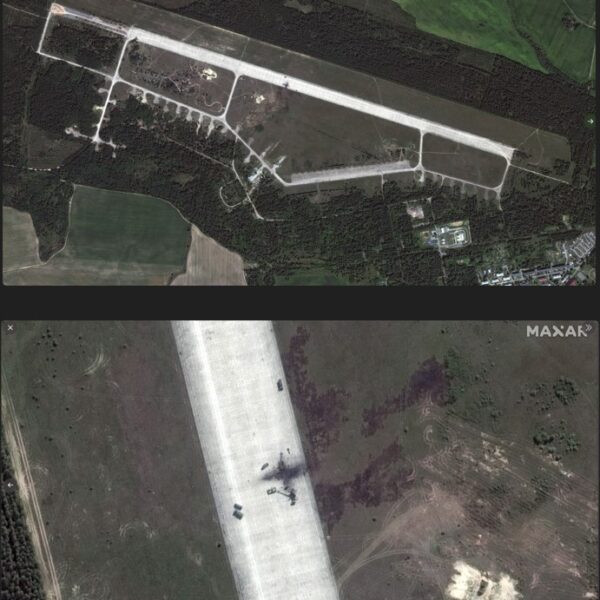 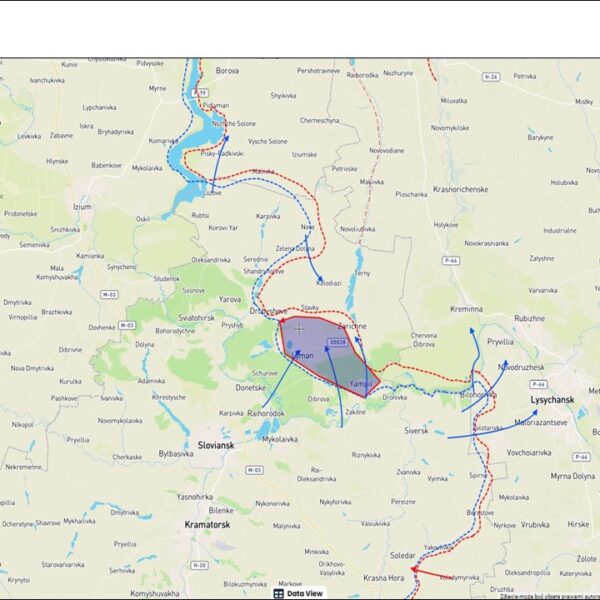 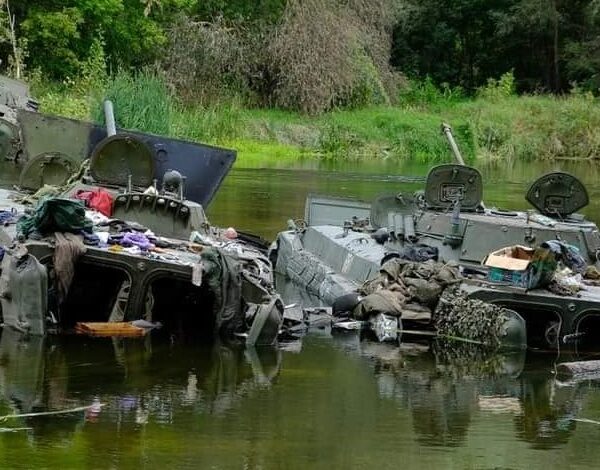