Russians also carried out artillery strikes on towns and villages near the state border. In particular, they shelled Yelina in the Chernihiv Oblast. Maiske in the Sumy Oblast, Strilecha, Starytsa, Vovchansk and Kamianka in the Kharkiv Oblast.

According to the Ukrainian General Staff (UGS), Ukraine was subject to a massive UAV attack on the night of 1-2JAN. Altogether, 42 drones and Kh-59 TV-guided cruise missiles were intercepted. It is unclear how many were fired. However, the mayor of Kyiv stated that 40 UAVs were aimed at the capital. As a result of the strike, emergency electricity shutdowns were introduced in Kyiv. The situation was under control in other parts of Ukraine.

On Monday, Russians also launched another wave of 44 UAVs, but they all were shot down, according to Ukrainian reports. In the near future, we may see an increase in the number and scale of Shahedes attacks as an attempt to exhaust Ukrainian air defence capabilities. These attacks are repelled by air defence units equipped with machine guns. But, the Ukrainian Air Defence spokesperson, Yuryi Ignat, stated that Kyiv also utilised the US-supplied NASAMS air defence system. Sheheds are not demanding targets. Although they fly low, they fly slowly, and their ability to manoeuvre in the air is limited. As such, they can be engaged by machine guns or MANPAPDs. Following the latest round of air and missile strikes, the Deputy Head of the Ukrainian Main Intelligence Directorate (military intelligence), Vadym Skibitsky, stated that Russians have enough missiles to conduct two or three more attacks on Ukraine.

During the day, Ukrainian aviation made ten air strikes on Russian concentration areas and five strikes on air defence sites.

The situation at selected directions and axes

Monday saw no major changes in the Kharkiv Oblast. According to a Ukrainian map, battles occurred near Dvorichna, although the impact on the frontline was limited.

According to Oleh Synyehubov, the Governor of the Kharkiv Oblast, Russians continue shelling the border area in the Kharkiv Oblast and settlements close to the line of contact in the Kupyansky and Chuguevsky districts. In particular, on Monday, they struck, Kupyansk, Vovchansk, Ohirtseve, Novomlinsk, Andriivka, Kucherivka, Lyman Pershyi, Vilshana, Orlyanske, Kyslivka and Kotlyarivka. In Kupyansk, as usual, civil infrastructure was damaged due to artillery strikes. After last week’s missile strikes on critical infrastructure targets in the Kharkiv Oblast, the heat supply has been fully restored, while the electricity supply situation is stable.

Last week, a special forces unit, Kraken, published a video which showed fighting in Novoselivkse. It is unclear how recent the video is and whether the village has been liberated.

So far, no official Ukrainian source has confirmed this development. Russian sources also did not mention the loss of the village. The situation is thus not clear. Most likely, the fighting for the town continues.

According to a Russian source, Russian troops tried to approach Stelmakhivka but failed. Russian artillery fired at Zapadne, Masyutivka and Kupyansk.

Similarly, near Ploshchanka, Russians tried to move forward but were repelled.

According to a Russian source, the UAF continue to move towards Kreminna. Russians also expect a large-scale attack on the city, including the 66th Mechanised Brigade, 25th Airborne Brigade, and the 80th and 95th Air Assault Brigades. As we mentioned previously, Ukrainians avoid attacking cities head-on, so based on their performance in this war, a frontal attack on Kreminna is unlikely.

The situation near Bilohorivka has been stabilised. Ukrainians remain deeply entrenched and push all Russian attacks back.

According to the Russian Ministry of Defence, 63 reservists died due to a Ukrainian HIMARS strike on a school in Makiivka. However, the range of human losses in this strike vary widely, from 50 to 600. Not only did Russians appear to keep many men in one building, but they also reportedly stored ammunition there, which compounded the effects of the attack.

We are unlikely to find out the actual number of soldiers killed in this attack, but it will likely be substantial. Despite this, the effect of the strike is unlikely to have an impact on the frontline situation. It also confirms that Russian operational security is lax. Indeed, reportedly the reason behind the strike was high mobile phone activity in the building, which led to a strike.

Going back to the frontline situation, no attacks were recorded near Verkhnokamyanske and Spirne.

PMC Wagner fighters continued attacking towards Vesele and Rozdolivka, but without success. Wagner also attacked Bakhmutske again too. However, Ukrainians continue to control most of the settlement.

According to a Russian source, on Monday, the attackers captured two strongholds near Soledar belonging to the 128th Mountain Assault and the 61st Mechanised Brigades. Reportedly, Russians tried to approach the city from both directions: Bakhmutske and Yakovlivka. Russians claimed that Ukrainians also reportedly lost 200 men in recent days in this sector.

All Russian attacks in Bakhmut were repelled. Ukrainians also tried to conduct a limited counterattack southeast of the city, but it is unclear whether the assault delivered any changes.

Russians asserted that over the past couple of days, Wagner personnel established control over two platoon strongpoints in Pidhorodne and established seven firing positions northwest of the Bakhmutske – Soledar line. Ukrainians are present in the northern parts of Opytne, but did not manage to extend their control on Monday.

The Russian source claimed that elements of three Ukrainian brigades are deployed near Klishchiivka: 24th and 63rd Mechanised and the 57th Infantry Brigades. Reportedly, Russians managed to capture a strong point near the village, while Ukrainian engineering units created defensive lines in depth (near Ivanivske) in case Klishchiivka fell.

There was a reported Russian attempt to sever the H20 highway near Kamyanka, but it reportedly failed.

After a couple of days of artillery strikes on Avdiivka, Russians tried to attack the city on Monday. The results of this assault are unknown, however, neither side reported any frontline changes in this area.

No changes were recorded near Nevelske, Pervomaiske, Vodyane and Opytne.

There were no changes in Mariinka. Battles for the city centre continued. According to a Russian source, there was an attack towards Pobieda, but it probably failed.

On Monday, Russian artillery fired at Vuhledar, Mykilske, Prechystivka, Velyka Novoselivka and Vremivka. We saw no changes in the In Vuhledar – Pavlivka area.

There were no frontal changes in the Zaporizhzhia Oblast.

On Friday, according to a Russian source, Russians broke through the first line of Ukrainian defence west of Dorozhnyanka. On Monday, Russians claimed that Ukrainians retreated to reserve lines, having lost 36 men killed and wounded.

According to UGS, Ukrainians launched several missile strikes on Russian bases and concentration areas in Basan, Polohy, Berdyansk, and Tokmak, killing more than 175 Russian soldiers and destroying an ammunition depot and 12 pieces of weapons and military equipment.

There were no changes in the Kherson Oblast on Monday. Russians again shelled the city of Kherson, damaging civil infrastructure.

A video appeared online on Monday showing a Ukrainian flag on Potemkin Island. According to a Ukrainian MP, Oleksiy Honcharenko, the island had been liberated. This information, however, remains unconfirmed.

On 2JAN, Deputy Commander of the Air and Air Defence Forces for Ideological Work, Col. Anatoly Bulavko, shortly commented on the latest activities of his subordinated forces. The Belarusian Air and Air Defence Forces, as well as the whole Armed Forces, are ready for any course of action and any development of a political-military situation in the region. Even during recent holidays, specified subunits carried out combat duty to prevent NATO provocations and reconnaissance actions. Every Belarusian citizen should feel safe and should “focus on their duties”.

On Monday, there was no information related to the training actions of the Belarusian Army. Nonetheless, unofficial sources informed about at least one training flight from the Baranovichi Air Base. No ground movements of Belarusian military equipment were reported.

However, a few transfers of Russian military equipment were observed:

In addition, the presence of Russian soldiers was observed in Vitebsk.

No major events have yet been recorded.

Airbus imagery acquired 01JAN shows a decreased presence of main battle tanks T-72 by 5, infantry fighting vehicle BMP-1/2 by 20, armoured personnel carrier BTR-80/90 by 28, armoured recovery vehicles by 13 and trucks by 17 in the parking area, compared to imagery from 5DEC.

Furthermore, no turretless BMP-1/2 are visible in the image.

The decreased presence of armoured vehicles suggests continued equipment drawdown from the 969th Tank Reserve Base. 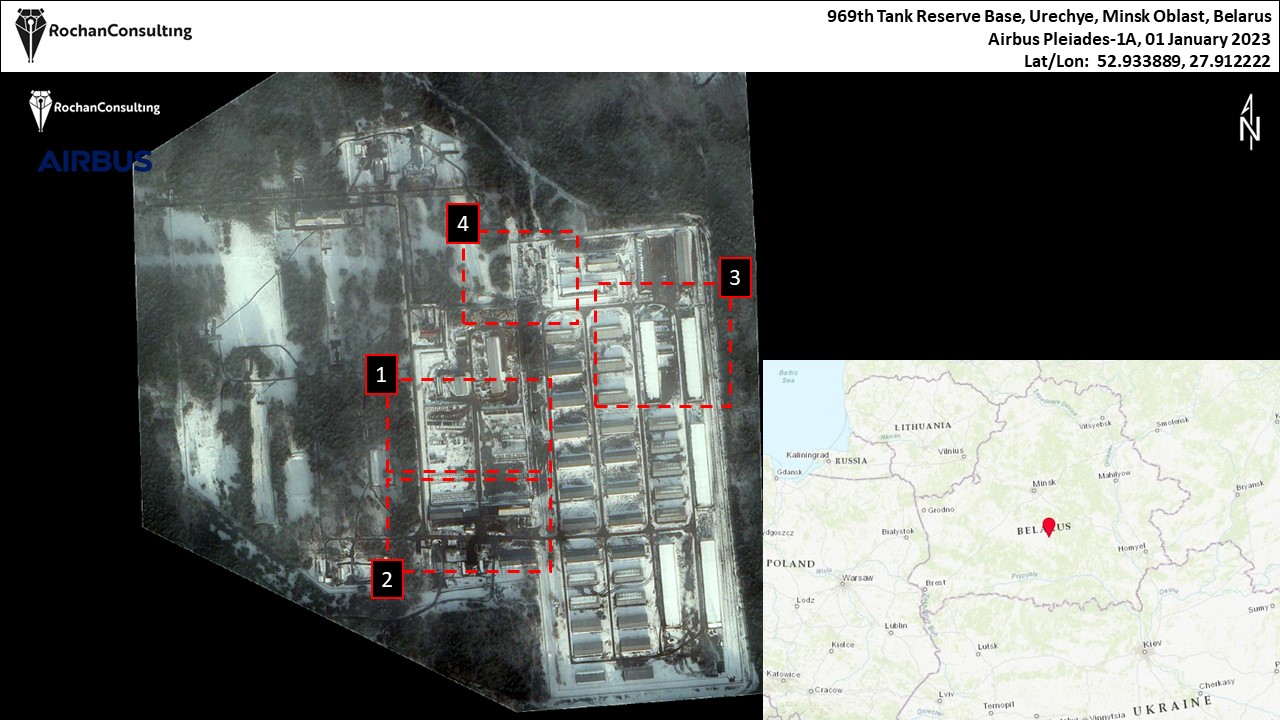 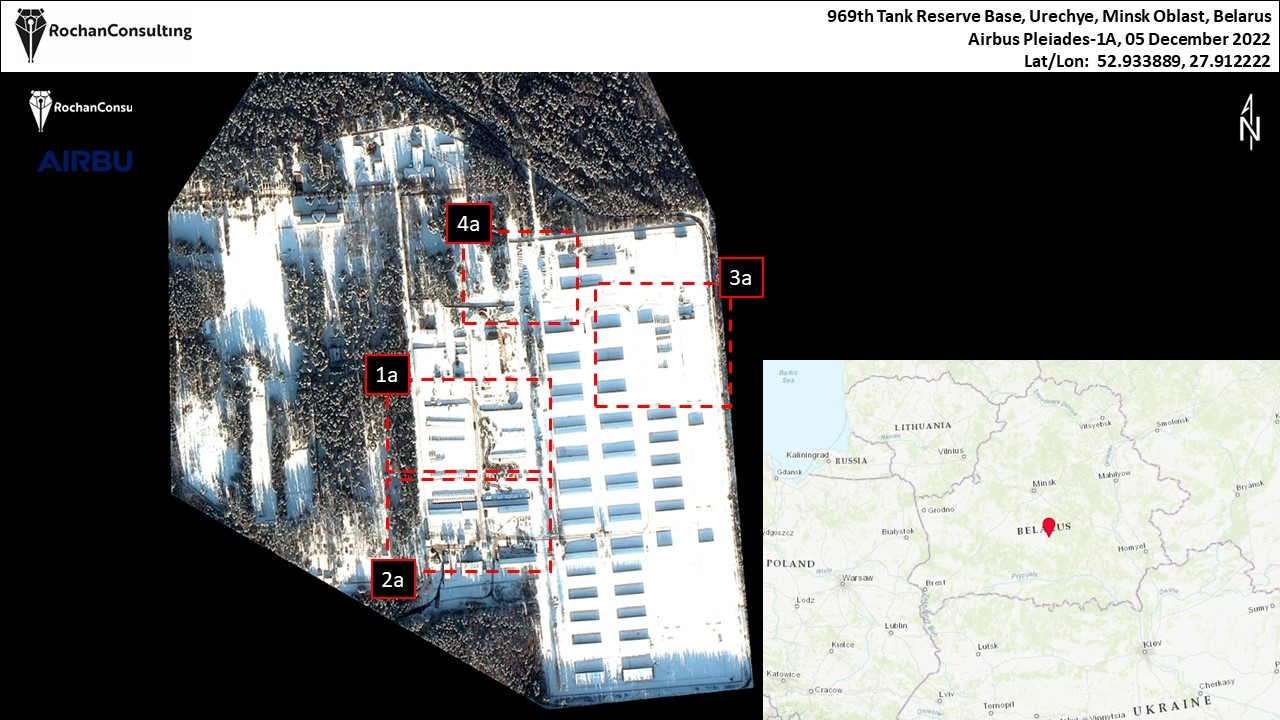 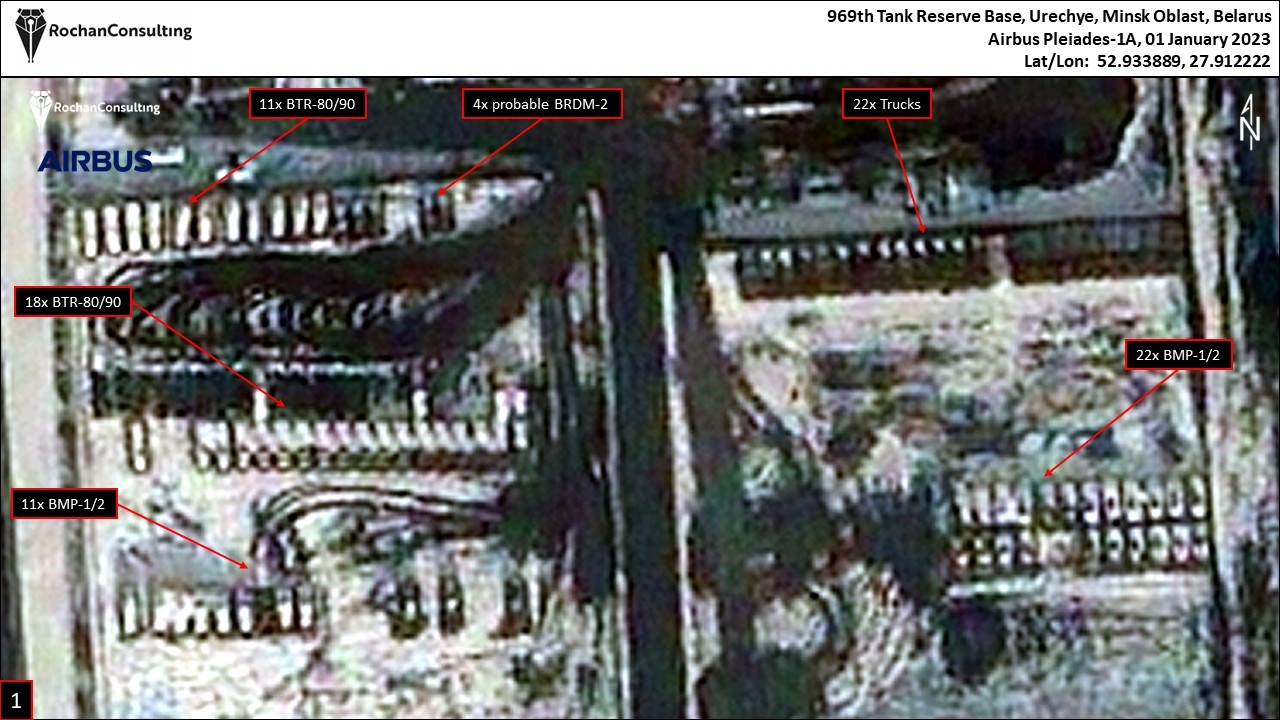 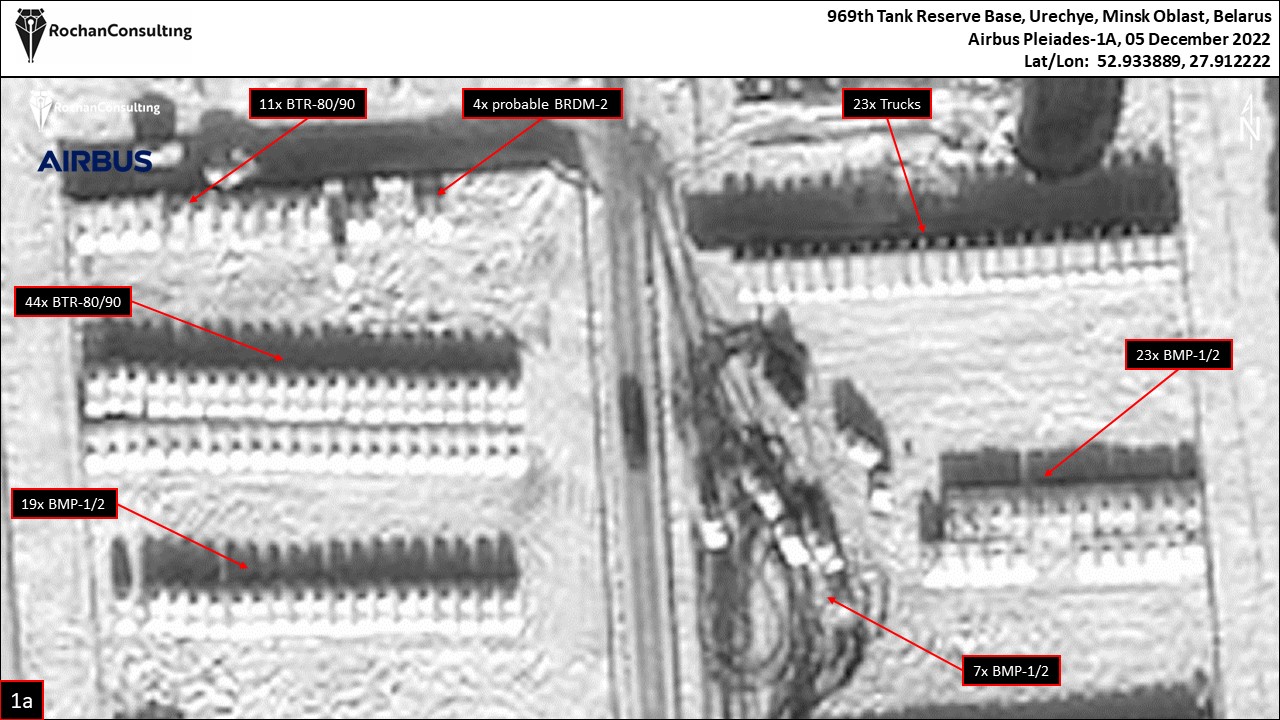 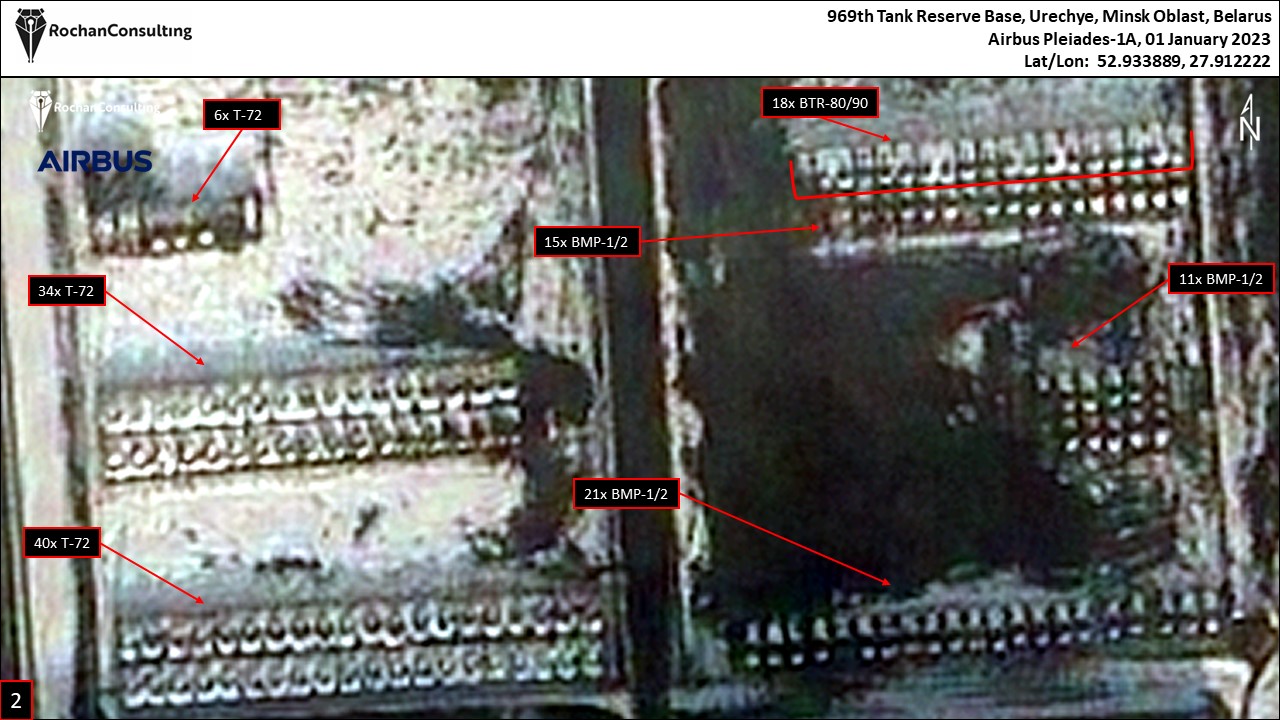 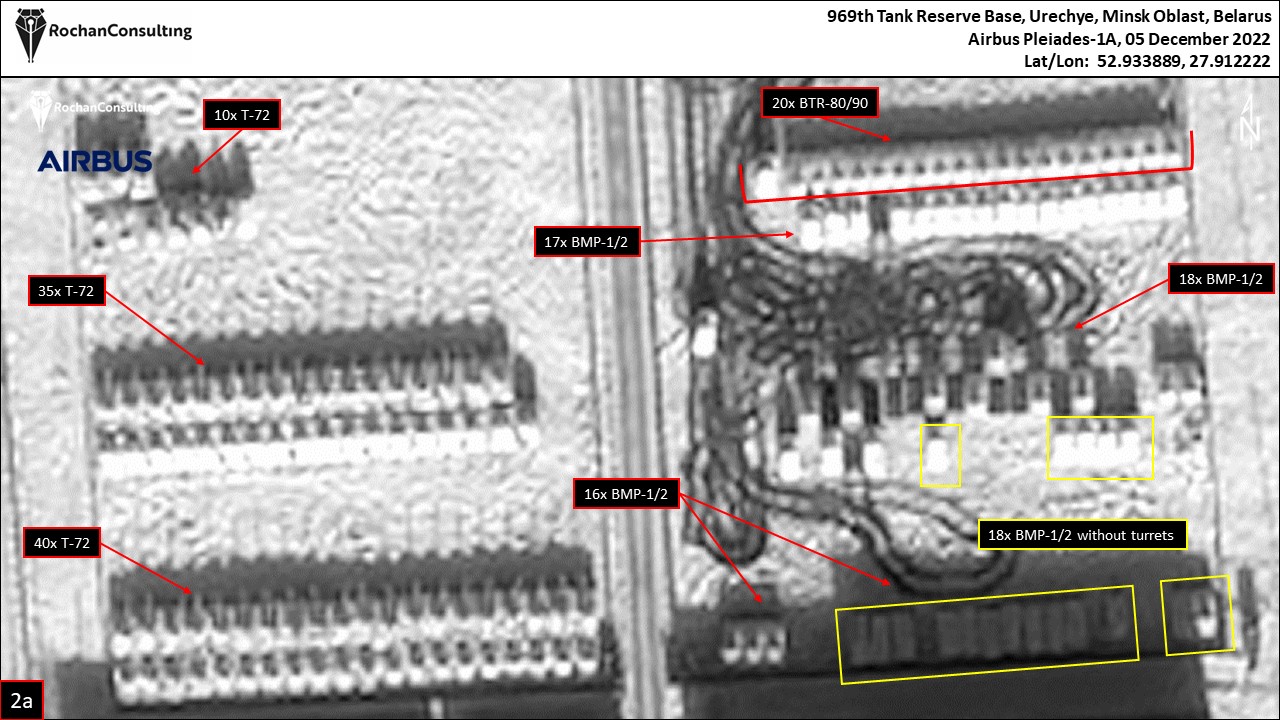 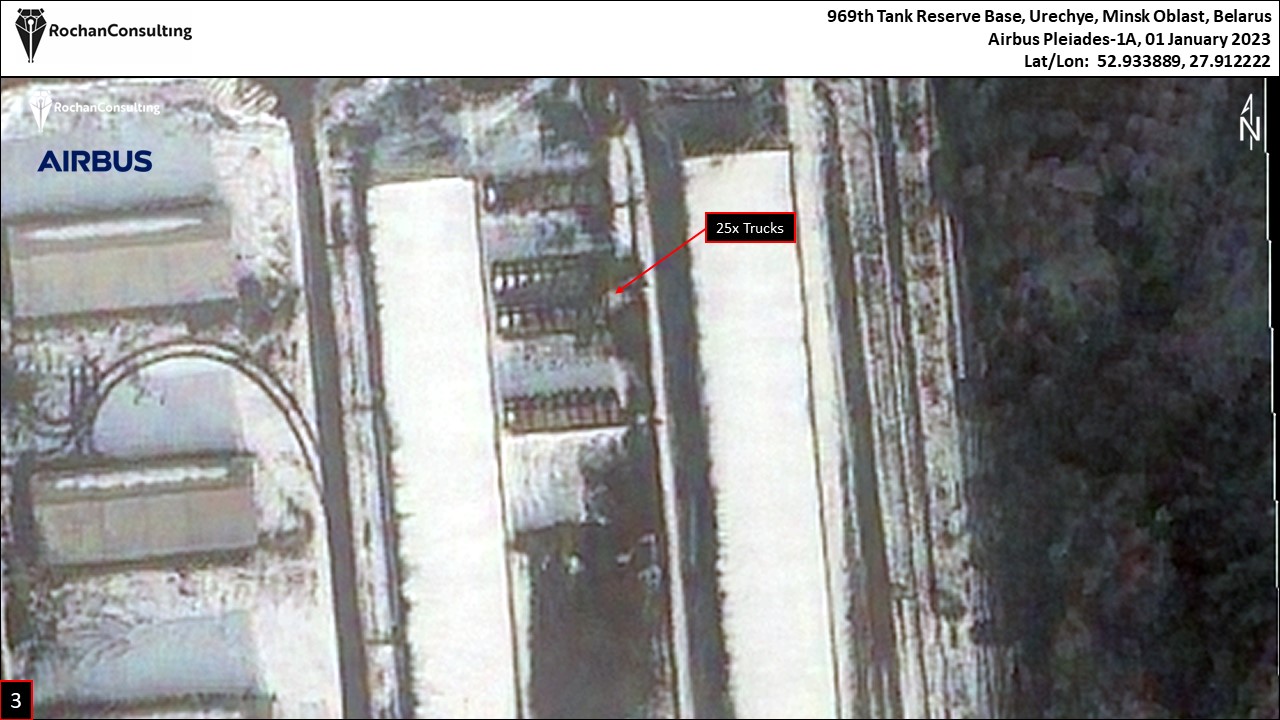 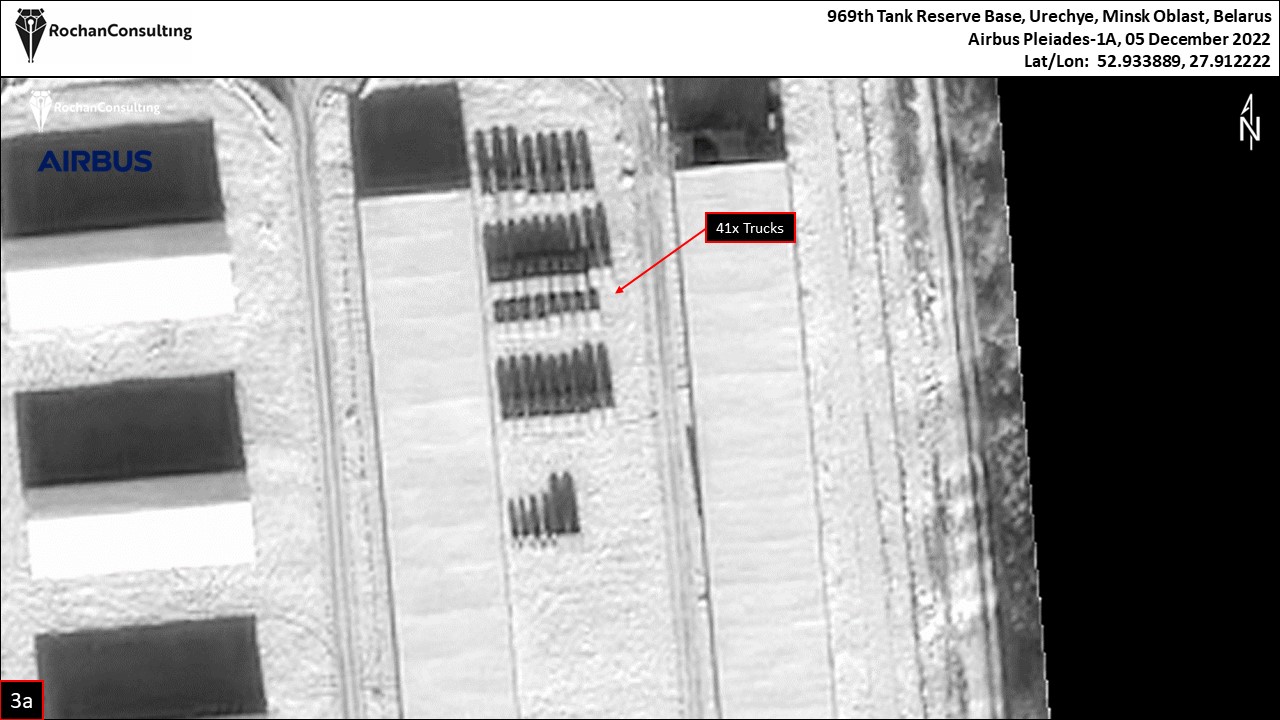 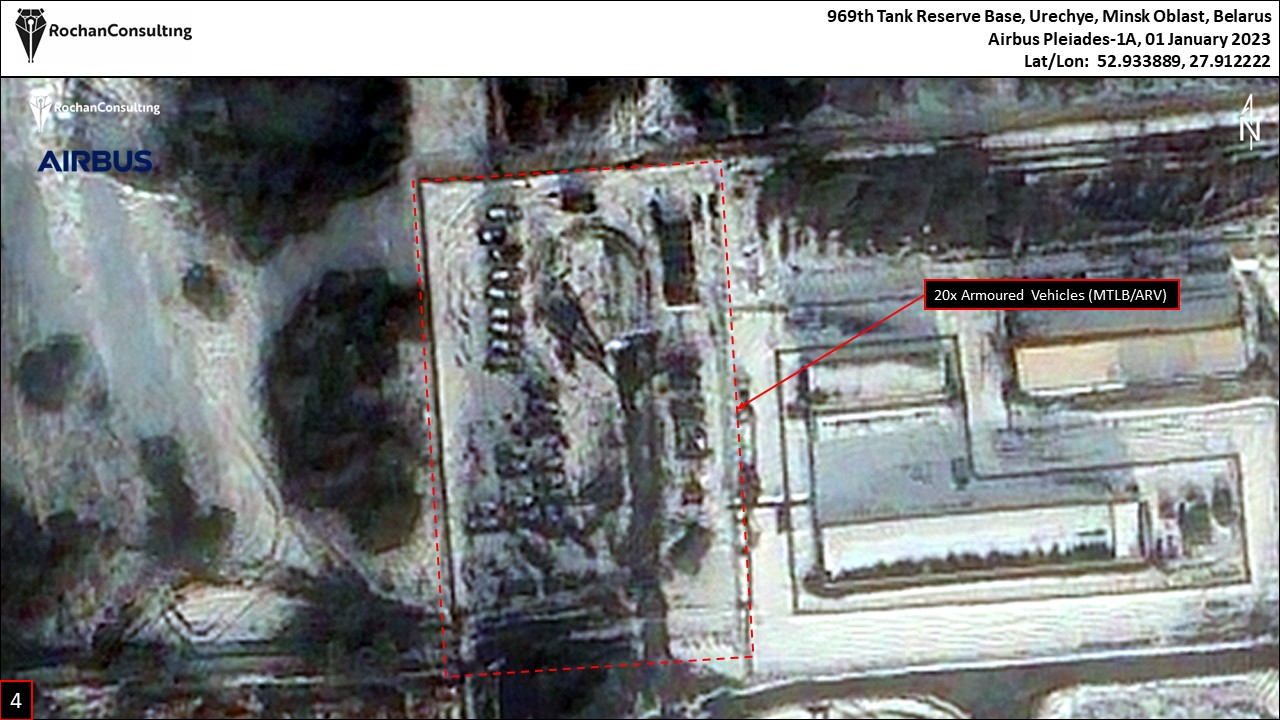 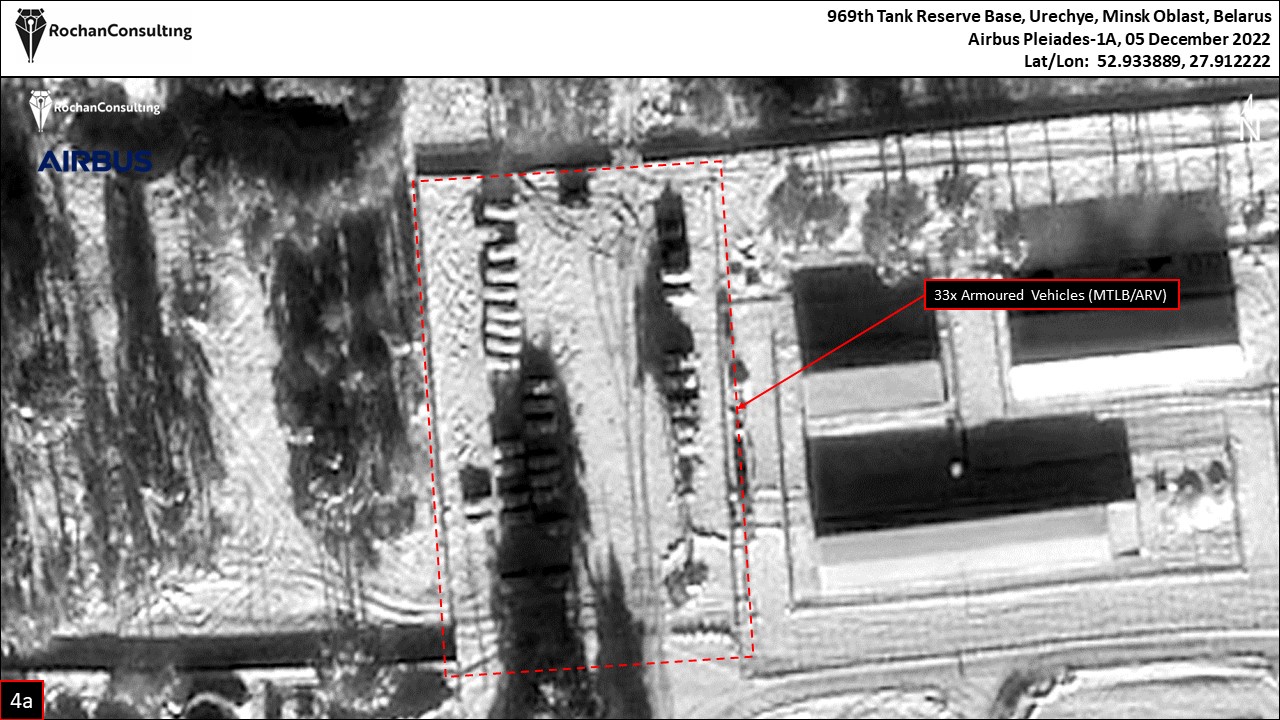 To improve performance, we have divided the map into two. One is the archive map, which contains data before the current week.

The current map is updated daily, and the archive is once a week. 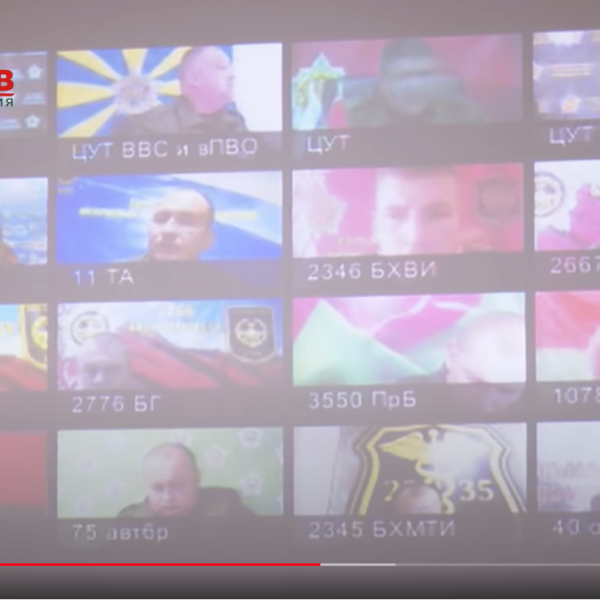 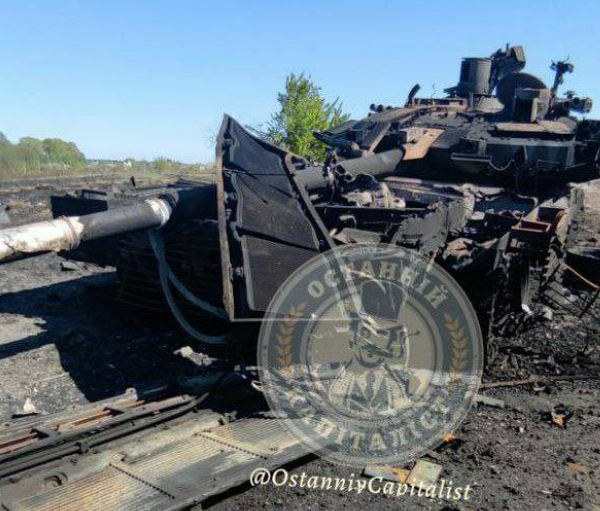