There haven’t been any significant changes on the battlefield over the past 24 hours. Russian forces are leaving Belarus, although some new company and/or battalion tactical groups have arrived in the south-eastern parts of the country. As stated before, we think their role will be limited to tying up some of the Ukrainian units deployed around Kyiv.

According to the Ukrainian General Staff (UGS), Central Military District forces are being redeployed to Valyuki-Soloti, from where they will launch an attack on Ukraine. The UGS also noticed that many airframes left Belarus for Russia. This change is reflected in our analyses of the military activity in Belarus.

There are concerns within Ukraine that the JFO forces would be surrounded. Indeed, Russia is already attempting to push south from Izyum. However, the objective of cutting off JFO forces will not be achieved without significant reinforcements. That’s why Russian units from Belarus need to be recommitted to battle as soon as possible.

Ukrainians have also stated a covert mobilisation is ongoing in Russia and that Moscow hopes to mobilise 60,000 personnel. The verification of the latter information is beyond OSINT. However, each day we look at any clues suggesting that recruitment is happening, and so far, we have not been able to confirm conclusively that mobilisation is occurring. There are indications that there are attempts to encourage reservists to rejoin the armed forces, but the scale of this undertaking is difficult to assess. So far, the military is focused on encouraging males to join, and apart from LPR and DNR areas, we have not seen any indications or forcible intake of personnel.

Altogether, according to the MoD, since 24FEB, Russian forces destroyed 125 aircraft, 93 helicopters, 403 unmanned aerial vehicles, 1981 tanks and other armoured combat vehicles, 854 artillery pieces and mortars, and 1876 other military vehicles.

The data above comes only from the Russian MoD. We publish to show how the other side is trying to shape its narrative regarding its military performance and targets destroyed. The numbers provided above should not be taken at face value. For instance, the MoD stated that Russian forces engaged 134 facilities on Monday. There is no doubt that the bulk of these facilities was engaged by Russian artillery rather than highly publicised air and missile strikes.

A standard degree of scepticism should be applied to data provided by the Russian and Ukrainian MoDs.

As some of you may know, the blogger Oryx is counting all the visual losses Russia and Ukraine have sustained in this conflict. Each loss is documented, and although his data does not fully represent the scale of destruction, Oryx’s counts provide better insights into equipment losses than what Ukrainians and Russians report.

This week we are doing a presentation for one of our clients where we will list Russian and Ukrainian equipment losses since mid-March.

These losses include destruction, abandonment, and capture.

Another blogger oragnised Oryx’s data to make them more visually appealing. His charts also represent Russian and Ukrainian losses divided by categories. Below are the results. 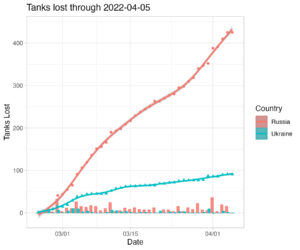 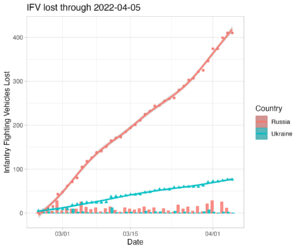 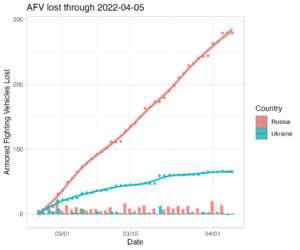 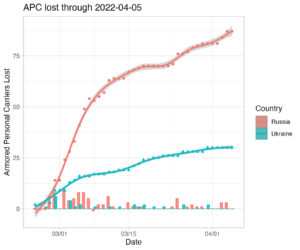 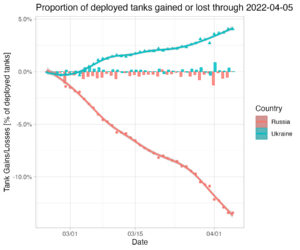 The chart to the left shows that Ukraine has been adding tanks to its MBT fleet despite losses. The chart “subtracts units captured by each combatant with their other loss types (destroyed, damaged, and abandoned). Ukraine has a net positive change in equipment – meaning they’ve captured more than they’ve lost. Russia, however, has lost many more units than it has acquired from Ukraine.” 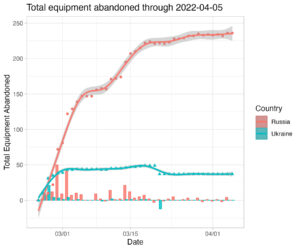 Lastly, we see the number of tanks that both countries have abandoned. Clearly, the abandonment rate has been a major issue for Russia, especially early in the conflict. Several factors likely caused this. There were problems with command, control, and communications, unwillingness to fight and poor morale, boggy terrain, overstretched supply lines and inability to provide logistics support.

The trend appears to have stabilised on the Russian side. We expect that the abandonment rate will not significantly change from now on. Firstly, the issue of overstretched supply lines has been fixed by closing several axes of advance. Consequently, with forces coming in from Belarus, Russian units can try to control the territory they are passing through. They will also have a higher force density ratio, increasing the operational pace and probably morale. Secondly, the weather will also gradually improve, so rasputitsa should become less of an issue.

Russian losses so far have been staggering. But to fully understand the scope of losses, let’s contextualise some numbers.

Before the war, we estimated that the 1st Guards Tank Army had 520 tanks, 140 AFVs, 450 IFVs and 180 APCs. In Ukraine, Russia has lost 425 tanks, 279 AFVs, 419 IFVs, and 87 APCs. If the current pace is maintained, Russia will soon have lost equipment equivalent to a tank army. Such losses are unsustainable over a more extended period.

As the conflict is entering the second phase, Russia has a lot to change regarding the conduct of its operations. If the Russian Armed Forces do not adapt, the prospects of winning the war by 9 of May appear bleak.

There was very little or no Belarusian military activity on 4APR. Almost all images or videos published on Monday had already been shown before. Unofficially, was Belarusian convoy was observed. It moved between Hantsavichy and Luninets.

Russian military activity was similar to the previous day’s. Again, there were no missile launches from Belarus, and air activity mainly was centred around training and evacuation flights. In terms of the movement of the ground, many convoys started entering Russia, which means that tracking their movement will now become difficult. It should be reiterated that we are not only seeing withdrawal. Some new Russian units continue to appear near the border with Ukraine. 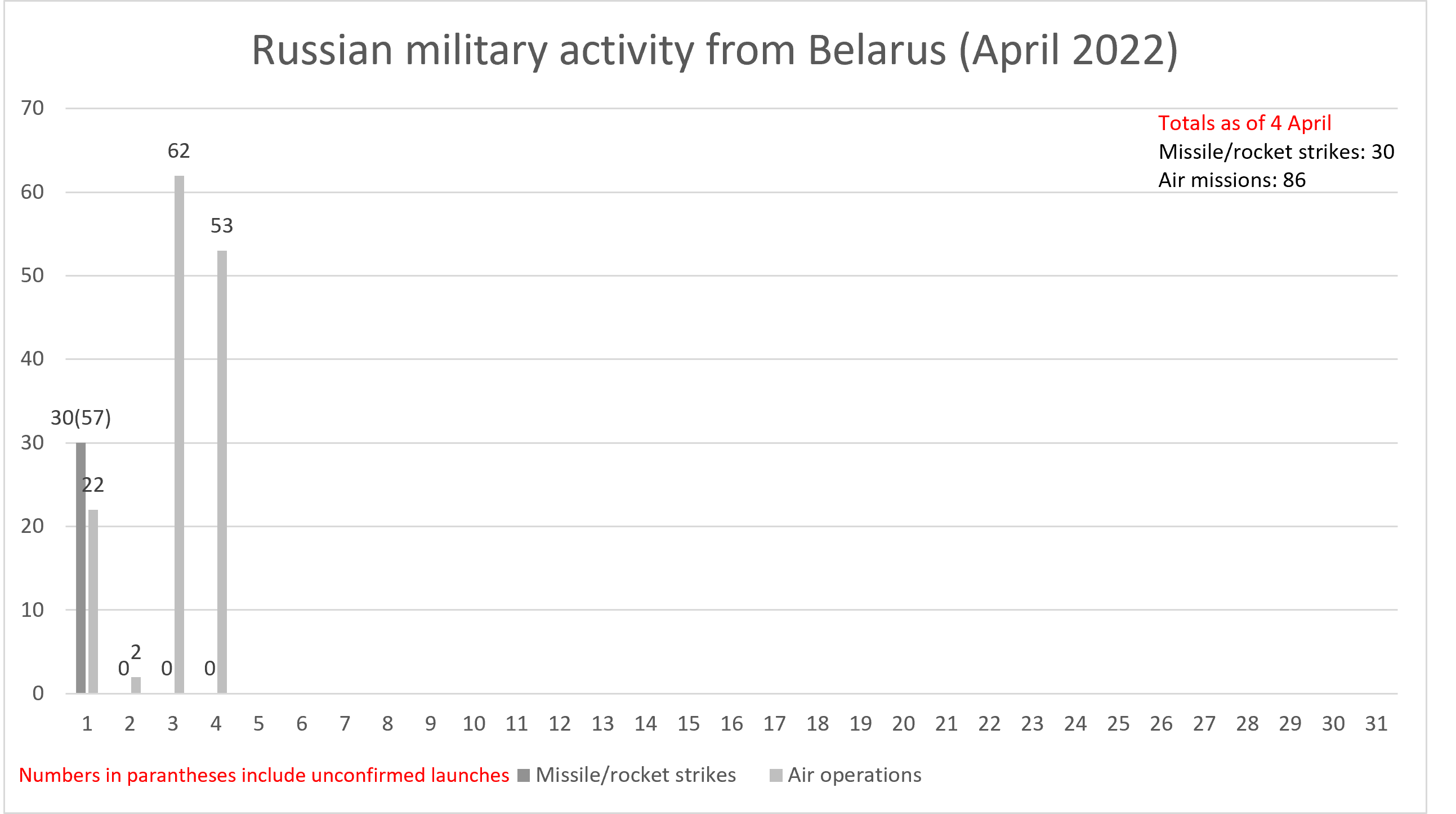 For data, please see the appendix. 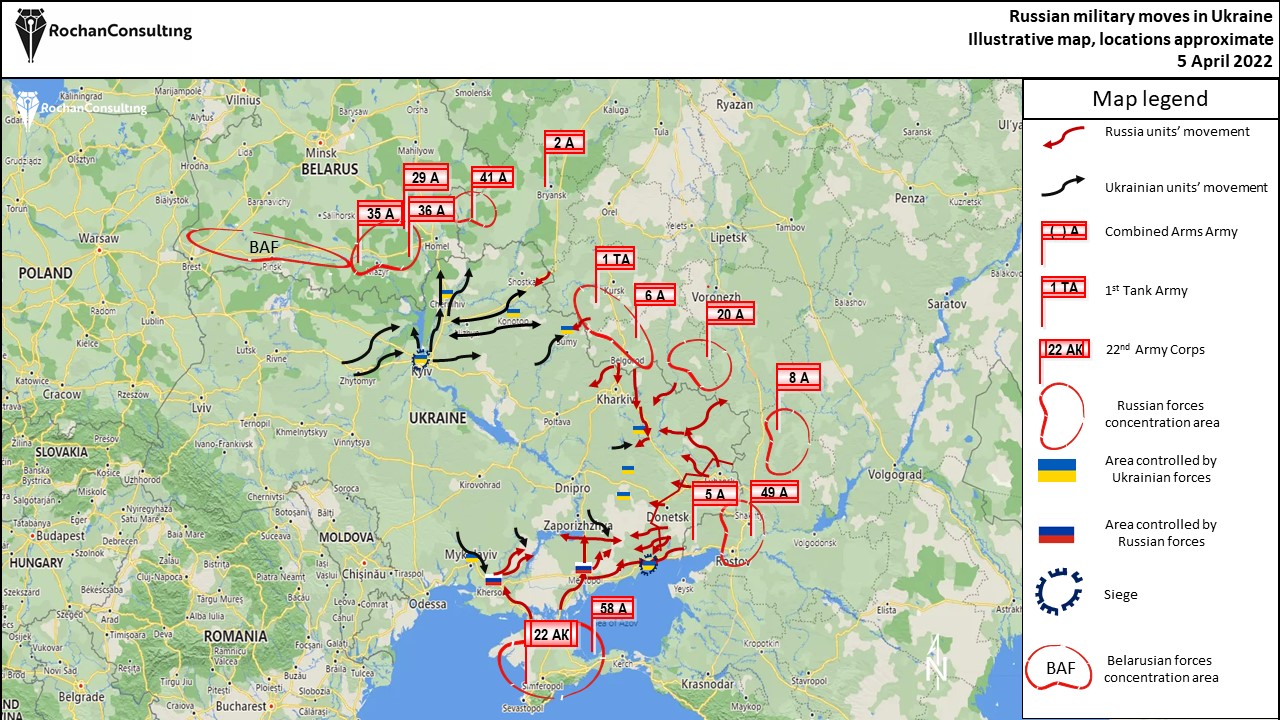 Some sources also stated that Russian forward units were destroyed near Barvinkove. The city’s mayor recommends evacuation as the Barvinkove is shelled by Russian artillery. So far, 4,000 citizens have been evacuated.

Russian forces are trying to establish a new river crossing over the Seversky Donetsk river. Once this is done, some new units coming in will push towards Slovyansk.

Kharkiv is preparing its defences for an upcoming Russian attack. According to the city’s mayor, Kharkiv is too big to be captured. Russia also does not have the numerical strength to fulfil this objective.

On 30MAR, Ukrainian forces took over an abandoned TOS-1 heavy flamethrower system near Kharkiv. On Monday, the TOS-1 was used against Russian targets near Izyum.

No changes in this direction.

(*Information based on Russian MoD statements)

Russian forces maintain their presence near Zaporizhzhia. Nearby settlements, such as Komyshuvakha, continue to be shelled by Russian artillery. The city itself is preparing its defences against a Russian attack.

We want to add another map created by colleagues from Finland as a supplement. The map superbly catches the current Russian positions in Ukraine.

Listed below is military activity in Belarus on 3 APR2022. All data found below comes from Motolko. 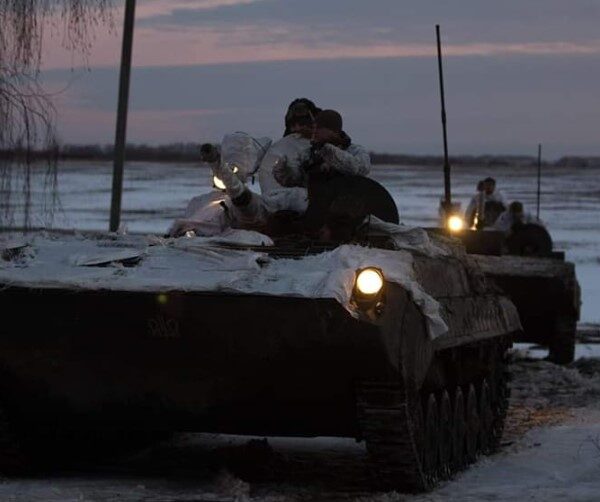 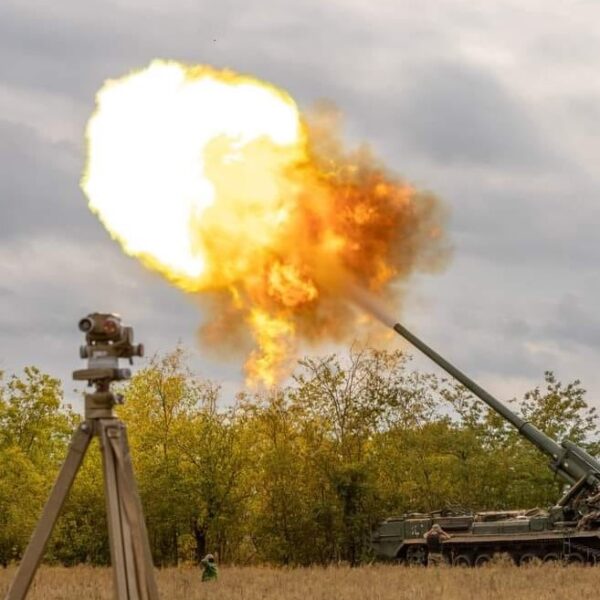